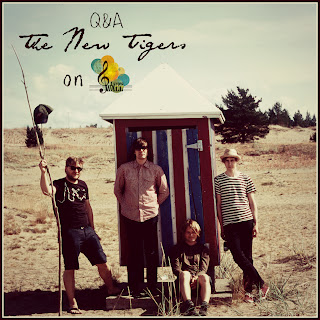 One more time we welcome on LOMW a band with a crazy name! Are you ready to meet them? Cool music, people! Cool music.

LOMW: Hello and welcome on LOMW. Could you introduce your band to us and tell us from where you are answering this long distance Q&A?
TNT: We are The New Tigers, from Turku on the west coast of Finland. There's four of us: Appu, Janne, Valtteri and Ville.

LOMW: How did you get this idea for such a crazy band name?
TNT: The usual story; seemed like a fun idea back then, and then it just stuck.
It was supposed to be something a bit silly sounding, like how could a tiger be "new" anyway?

LOMW:  On Facebook I found out that you call your music “fuzzy pop”. Can you explain to us this term?
TNT:  It’s very melodic, but at the same time quite distorted, so it’s straightforward and hazy at the same time.It's hard to find a name for your music. Calling it for example "shoegaze" or some other genre that already exists would just put it in a narrow little box, and we don't want to be there. So, we know it's poppy, as in quite catchy and melodic, but it also has this other noisier nature. I guess fuzzy pop sums that up quite alright.


LOMW: Do you believe that social networking has helped bands like yours to build their audience and in what way?
TNT: I suppose they have. We are not super good on networking in the internet but at least it’s easy for folks to hear us and see our videos, and we try to keep our facebook page interesting. Mostly we just concentrate on the music though.
LOMW:  You have already profiles and accounts on Facebook, Soundcloud, Twitter and Last.fm but not yet on YouTube. Why is that?
TNT: Some other people have been friendly and put the stuff there, like live videos and such. We also have our personal youtube accounts so haven’t needed one for the band yet. Our label Soliti also now has its own channel there: http://www.youtube.com/solitimusic
Go and see our videos there, as well as our groovy labelmates!

LOMW: What is the most beautiful thing you have ever written in your life as a band and how did you get inspired to write it?
TNT: Maybe the song “Pocketful of Sand” because it just came out of nowhere. We played it and said “that’s the song.” Nothing was thought in advance, it just appeared, and the version we recorded is almost the same as the first time we played.

LOMW: Which song would you like to cover right now and why?
TNT: La la la means I love you by the Delfonics because it’s a beautiful song.


LOMW:  It’s always interesting to know how the members of a band have met each other, is there any special story about The New Tigers?
TNT: We have known each other for ages. Turku is a small city so people who are interested in similar things usually know each other. The band was founded at the wedding of Appu’s brother in 2006 by Appu, Valtteri and the original drummer Kece. Janne joined some time later and Ville joined this spring as Kece moved to Switzerland. 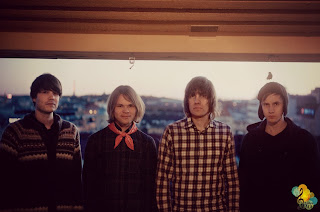 LOMW: What are your future plans? Album, gigs, a trip to Greece, etc?
TNT: We just finished our new album “The Badger”. We’re very pleased with it. It comes out in september, and a single will come in august. After that we hope to play a lot of gigs, and Greece would be wonderful! We're going to play in Spain, so that's not too far from Greece (we know it is really far, but both are countries of Mediterranean sea, so it's definitely closer than Baltic sea.) Hope that would happen.
LOMW: Before we finish this amazing long-distance Q&A, I want you to salute the greek audience in Greek and the people from Finland, -that I believe they are called “Finns” – in Finnish! (Google Translate and Copy-Paste are allowed)
TNT: ό, τι καλύτερο!
meaning: moro vaan!