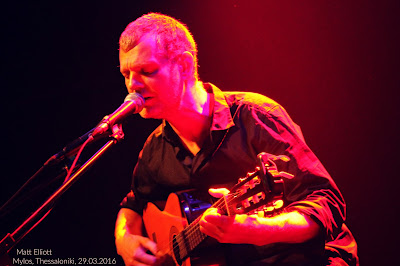 Monday, 28.03.2016, I check on my phone. I was expecting to have a coffee with Tasos, instead Tasos sends me a facebook message canceling our meeting. He invites me though for next days' event at Mylos. A live concert that "can't be missed" as he stated. Matt Elliot & 226+3 Buttons. First thought: "It is a live concert, so I really want to go. But I don't even know who these people are. I should go back home and check them out. But I will go back after midnight and I will really need to sleep. Anywayzzz, if I want to go I have to check them out first." So, I am heading home and I check on Matt Elliott's biography. The guy seems really interesting and kinda cool. The desctription of his genre left me curious and very excited: Dark Folk Music. How would it be? Then I checked his brand new clip for last single Wings and Crown and I knew that this night would be magnificent. Then I fell asleep in piece and calm.

Tuesday, 29.03.2016, a couple of friends joined us -all of them are musicians and most of them are great fans of Elliott. The night is about to start. We meet out of Mylos, all at the same time, the night has that thin cool breeze. We go in the place. Elliott chats with people in the crowd. He is waiting for the support act to begin. Then, the 226+3 Buttons come on stage. Elliott stays in the crowd and enjoys the music. No talking, only some whispers here and there. It wasn't full but the atmosphere was giving you that good feeling. After a while Matt Elliott comes on stage... 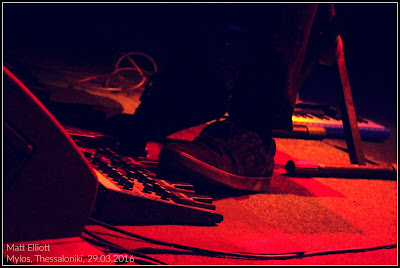 just a guitar and a loop station. What would follow, it was a mystery. Then he played the first notes and my mind started to travel to places... Death, Love, Peace... he managed to combine all the emotions.


How a guitar and a voice can fill the space? You should probably go and see that by yourself. Each song was a more than 5 minutes trip... and the people would not speak. It was a peaceful night.


This whole show I can only describe it exactly as the title of his last album "The Calm Before". 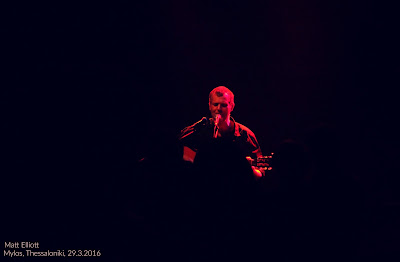 For someone who knows nothing about Matt Elliott and is into folk music, this performance is going to stigmatise him. This man has a way to pour out his feelings. You could see his pain and how passionate he is with music.
The show was over and Elliott came back for two more songs. Since, it was the first time I was listening to his music, it is impossible to tell you anything about the tracklist. I can only say about his cover of I Put A Spell On You and Misirlou. Great versions, both of them! While he was playing Misirlou, the crowd was singing along!
Matt Elliott proved me right. He is indeed interesting and kinda cool... When he started playing one of his new tracks "The Feast of St. Stephen" and he completely lost it, he just stopped and said "Sorry guys, I am going to play next a song that I remember how to play it". How cool is that?

If you wanna know more about Matt you can reach his facebook page: https://www.facebook.com/mattelliottthirdeyefoundation/?fref=nf 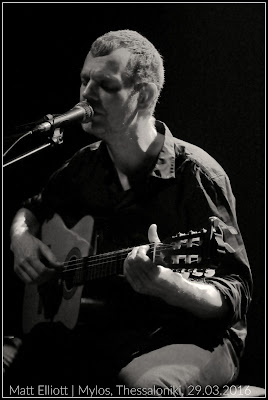 And if you wanna see how funny he can be, just read some fun facts about him:


The Third Eye Foundation / Matt Elliott fun facts
(warning : one or more of these facts may or may not be true...)

Matt decided to drop out of school walking home through a frost bitten park listening to The Smiths, thinking that the world is too beautiful to waste time on things you don't want to do.

He played in some college band with people from Monk & Canatella and Stanton Warriors.

Though Matt is well know for producing dark drum and bass, he only used the Amen break in one song.

Despite some long debate at Tanned Tin Festival in Spain, it has been proven by fact that Matt is 2cm shorter than Thurston Moore.

John Peel called him at his house to talk about the best format to send music in the future.

Matt is an avid collector of fine bicycles and can be found on various cycling forums on the internet. He is also actively commenting Youtube videos on a daily basis, trolling people on
cyclist vs drivers or 9/11 matters.

Wire writers admitted listening to The 3EF while writing the magazine. Also, Matt was invited by Wire to a Tokyo party but refused it because he was too afraid of flying (and he still is).

Matt has the habit of accidentally offending people, like DJ Spooky or Charlie Haden's son Josh from Spain, and all of the members of Mogwai.

He is a connaisseur of absinthe, He and Yann Tiersen helped keep the absinthe industry running during the years 2009/2010/2011.

The song « In Bristol With a Pistol » was written as a tribute to the Bristol scene.

Some random people who really don't know who Matt Elliott is include: Amon Tobin, Thom Yorke and Jonny Greenwood. The situation on Thom Yorke might have changed since.

Despite Stephen O'Malley buying the 8 vinyl “Songs” boxset from the label mailorder and saying nice things about Matt on a festival DVD, he politely declined a collaboration that wasn't even Matt's idea in the first place.

Once while high on drugs, he saved Primavera Festival convincing Prefuse 73 to go on stage to play for literally 100 people because everyone was watching the recently reformed Pixies on the other stage.

Three of Matt's friend are friends with Madonna. 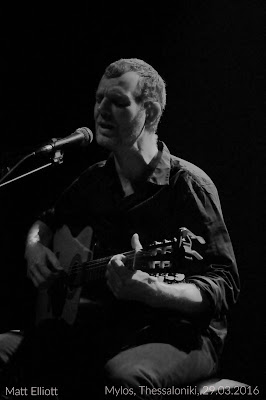 One french famous female booker agent admitted she conceived her kid while having sex listening The Third Eye Foundation.

It's not unusual for fans of Matt Elliott to travel for his concerts. He collected stories of people travelling from Sicily to Paris or from Moscow to Berlin as well as travelling across the US.

Matt, despite living in France for almost 15 years now, he cannot understand why a door or a window is feminine and a bike or a traffic light are masculine and will probably never fully understand this or the other idiosyncraces of the french language...


Matt is a self professed champion of ping pong having beaten such luminaries as Josh T Pearson, Chapelier Fou, Ezekiel, the 38 members of Yann Tiersen's band and crew, Mein Sohn William and all of Mogwai.

You will find yourself alone

Special thanks to Tasos Karadedos for the invitation.
Posted by Unknown at 6:09 PM